Here's the oscilloscope problem that I was describing in class. If ANY part of the waveform is off the screen, you can't trust the results. Here's an example using a TDS3012B oscilloscope. As we saw in class, the falling edge of the square wave exhibits a little undershoot. At 500 mV/div, the undershoot appears to be about 800 mV (at the bottom of the screen). Note that some of the four-volt square-wave waveform is off the top of the screen. 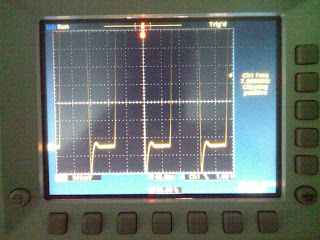 However, if we move the trace up to the top of the screen, now the undershoot appears to be about 1400 mV (note that the vertical scale is still 500 mV/div). 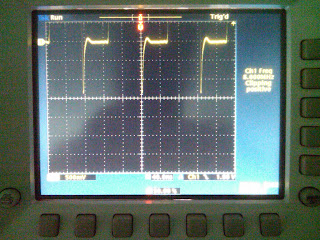 Email ThisBlogThis!Share to TwitterShare to FacebookShare to Pinterest
Labels: Lectures